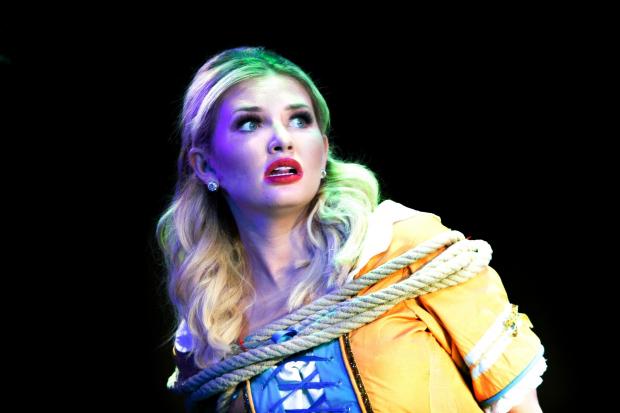 Love Island star Amy Hart has made a plea for theatres to remain open as she criticised the Government for treating industry workers “horrendously” when they were closed.

Several West End shows including The Lion King have been forced to cancel performances due to outbreaks of coronavirus among cast and crew.

Hart, who is starring in the Jack And The Beanstalk pantomime at the Kings Theatre in Portsmouth, said the cast and crew are doing everything they can to remain safe and keep the show open.

She said: “We’re trying to limit socialising outside of work and just try and be mindful because we don’t want to shut down and we don’t want anything to happen.

“I think people just want an escape even more now, they come ready to party. I hope that we can give people escape for a couple of hours.

“We’re testing and we’re all in our own dressing rooms, we are not allowed to congregate in each other’s dressing rooms, you have to wear masks until you put your mic on and just try to be careful, sanitise everywhere.

“When they go out into the audience to do the water guns and stuff, they put the masks on, we’re taking every precaution we can.”

Explaining why it is so important for theatres to remain open, she said: “From a sort of romantic point of view, for lots of children panto is their first experience of a theatre, and all the family can enjoy it.

“From a more logical point of view, it keeps a lot of people in work.

“A lot of my friends that are in the theatre industry suffered really badly with their mental health during lockdown because they couldn’t do their job and they were treated horrendously by a government who treated them like they don’t matter.

Amy Hart starring in the Jack And The Beanstalk pantomime at the King’s Theatre in Portsmouth. Photo via PA.

“But also as well for theatres themselves, panto is when they make so much of their money, to prolong the longevity of the theatre, so they need to stay open to secure the future of the industry.”

Hart, who is a vocal supporter of the Labour Party, pointed out the theatre she is performing in was told it would have to shut down on December 18 last year, the day of the alleged Christmas bash in 10 Downing Street.

She added: “That makes it even worse. I obviously have been a very public Labour Party supporter, but I do think it is one rule for them, a different rule for everyone else. I think it’s ridiculous.”

Hart has been vocal about her politics and appeared on Question Time in October.

She said she was not surprised when she faced criticism for her place on the panel but has been asked to appear on the show again.

“They said I could go back so I look forward to going back again and being a bit more vocal this time, because I was quite scared.

Hart is playing Princess Jill in Jack And The Beanstalk at the Kings Theatre in Portsmouth until January 2.