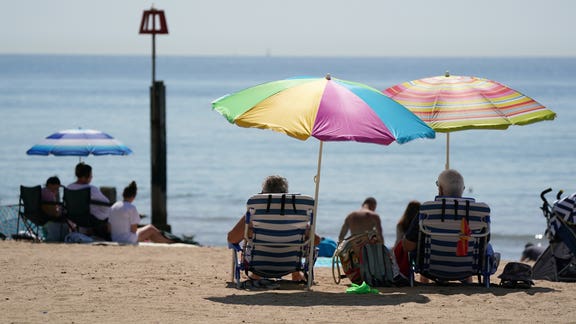 Temperatures could reach 26C this week ahead of Bank Holiday weekend, forecasters have said.

After a month of grey skies and wet weather, part of the UK will enjoy periods of warm sunshine due to “dominating” levels of high pressure.

The Met Office have made the prediction after hopes  of an August ‘heatwave’ were all but extinguished.

“However, there will be a north-easterly breeze coming in from the North Sea making it feel colder for some regions especially later on in the week.

“Where there is sun, particularly on Wednesday, temperatures could reach highs of 24C in England and Wales, while western areas in Scotland and Northern Ireland could be up to 26C.

“This all depends on the amount of cloud some regions see.”

Those who suffer from hay fever in England and Wales have been warned that UV and pollen levels will be high over the next couple of days.

Unfortunately, Ms Kent has said that temperatures will drop again as Brits prepare to enjoy the August Bank Holiday.

She went on to say: “It’s not going to be wall-to-wall warm weather all week, that north-easterly wind will continue to peg back any chances of the temperature going too high.”

It comes after parts of the UK have seen large amounts of rainfall for the time of year, including the City of London, which has experienced its ninth wettest August on record.

High pressure wins out this week, bringing a good deal of fine weather with some warm #sunshine 🌡️🌤️

Get the details in the latest forecast for the week ahead 👇 👇 👇 pic.twitter.com/xNovZATlQI

However, Ms Kent said this does not represent the country as a whole- concluding that it’s been the seventh warmest August on record.

She added: “This month has pretty much swung back and forth for many, areas in Scotland have been drier than usual, while areas in the south-east have, of course, seen plenty of torrential downpours.

“It hasn’t been so bad, the country has generally seen 72% of its average rainfall for the month so far, which is pretty much where you want to be as we come to the end of August.”