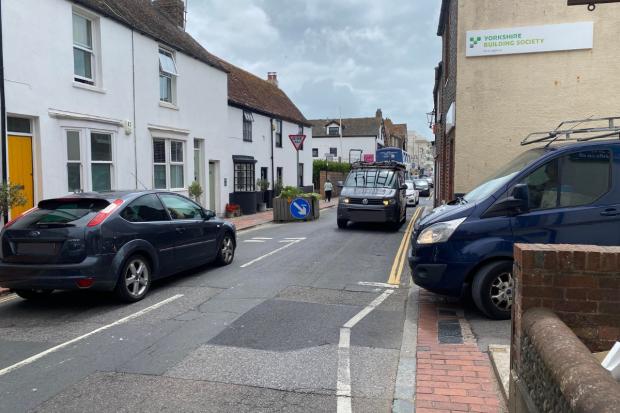 A BUSINESS owner has expressed frustration that repair work cannot be carried out because the council is refusing to move a controversial planter.

Petra Griffiths, owner of PSG Financial Solutions in the High Street in Rottingdean, said that, while she and her assistant were out at lunch, a bus had scraped past part of the store’s signage, as well as a lamp.

While the bus company has accepted liability and agreed to pay for repairs, Petra said: “We’re now in a situation where we can’t get the work done because the builders would have to put scaffolding up which will go out into the road, but in order to do that, they would need the council to temporarily remove the planter so cars can get through.”

The planter, put in place in 2019 to slow traffic along the High Street, has proved controversial with some residents due to the already narrow roads in Rottingdean.

Rather than removing the planter, Brighton and Hove City Council instead suggested putting a traffic management system in place.

“That wouldn’t work, because the planter would still be there and the cars and buses would still not be able to get past,” Petra explained.

She is concerned to get the damage caused by the collision fixed urgently, as debris from part of the building has fallen onto the pavement below, causing a hazard to passers-by.

“Every time I was coming into work, more debris had fallen on the floor and that could seriously hurt someone,” Petra said.

The bus knocked a lamp and damaged part of the shopfront

The accident happened on May 20 and Petra has been attempting to get the repair work done ever since.

Her store is next door to a shop which saw a car crash through the front entrance in January 2020.

“That happened soon after it had been put in. I was working at the time, I thought a bomb had gone off, Petra said.

Former Rottingdean councillor Lynda Hyde suggested that the council is “determined” to avoid removing the planter, even for a short time, because residents would demand it not to return.

A council spokesman said: “Our highways team is always keen to support residents and businesses when they need to repair buildings or carry out works, particularly in challenging locations.

“In this instance, our team has suggested an approach to the contractor carrying out the works that would enable the work to go ahead and not impact on what is an extremely busy location.

“Our team has not so far received a response from the contractor.

“We look forward to hearing from the contractor so that we can work towards a suitable solution so that the building can be repaired.

“The planter plays a vital public safety role in slowing down traffic along the High Street.

“It was put in following a public consultation that showed a large majority of respondents to be in favour of us installing it.”

Nick Hill, commercial director of Brighton and Hove Buses and Metrobus, said: “On May 20, 2022, a bus was passing through Rottingdean High Street and made contact with a building.

“This is a rare incident and no one was hurt.

“We contacted the company straight away to resolve the situation and are paying for the repair work to the building.”