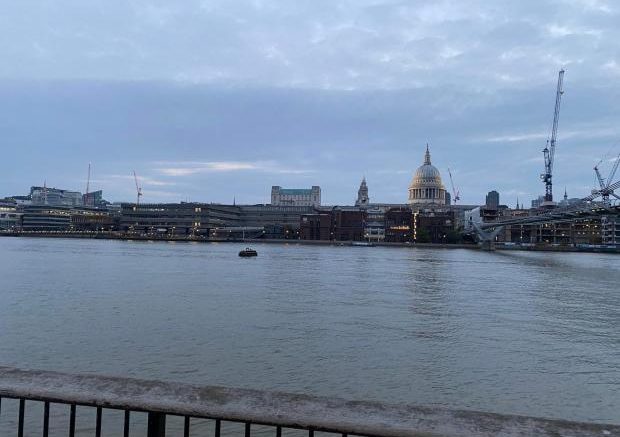 PEOPLE from across the country have been invited to mourn the death of Her Majesty the Queen at her lying-in-state, with organisers arranging perhaps the most British of send-offs with seemingly the world’s longest queue.

Crowds have waited for hours to get a glimpse of the late Queen’s coffin – and I joined them on Thursday morning.

I arrived in London just before dawn, armed with a power pack to charge my phone, two bottles of water and a granola bar (although I later wished I’d brought a little more in the way of food).

After a bit of searching, I joined the queue at Blackfriars near the Tate Modern at 6.30am. At that point, the line was just over two miles long but I was still expecting a long and tiresome journey ahead.

I joined the queue near the Tate Modern, opposite St Paul’s Cathedral

As we all made our way along the South Bank, people chatted with their neighbours in the queue. I got to know Chris, who served in the Royal Navy in the Gulf during the Cold War and had come to pay his respects to his former commander-in-chief.

Meanwhile, journalists from the world’s media occasionally pulled people aside to ask what The Queen meant to them.

Toilets lined parts of the route, including along the aptly named Queen’s Walk, with people able to quickly step out of the queue and rejoin their friends and family a moment later.

Two hours after joining the queue, I’d made it to the London Eye and was issued with a pink wristband and I soon made my way down a free-flowing walkway by the Covid-19 memorial wall – a sombre enough experience in itself.

Shortly before 9am, I joined a group of thousands of people in a zig-zag style queue in Victoria Tower Gardens next to the Palace of Westminster.

The queue was so long that, not only was it hard to get an idea of how close you were to the end, but it was also hard to ascertain how far you had gone.

However, volunteers from scout regiments from across the country were helpful in getting an idea of how close I was to the hall, even though they weren’t able to tell me how long it might take.

Queues snaked near the Palace of Westminster

As I went around the zig-zag, I kept track of how big the queue had become and was shocked, but not surprised, to see it now snaked all the way to Tower Bridge.

I could even see people across the Thames by the Covid memorial wall now in gridlock as the queues built up.

It was also incredible to see people from all generations and backgrounds represented in the queue to pay their respects to the Queen – all of us united in grief, but also appreciation and celebration of her amazing life.

People quickly ate the last of their sandwiches and downed the last of their drinks before they went to security – there are strict restrictions in place, with plenty of bins on hand to dispose of items not allowed in.

After going past security, we slowly walked towards the Palace of Westminster. I turned a corner into the building and a hush descended.

The chatter from outside abruptly ended and the mood became instantly more solemn as I climbed a small flight of stairs towards the hall itself.

I was caught on an ITV live stream of the Queen’s lying-in-state: credit – ITV

As I walked into Westminster Hall and saw the Queen’s coffin, my emotions got the better of me.

I was reminded of her decades of service to the nation, her brilliant wit, and how one of our last historical links to the generation that fought in the Second World War was now sadly and irrevocably broken.

Slowly but surely, my time came and I bowed my head to the Queen’s coffin before moving along to allow others to do the same.

Before I left the hall, I was lucky enough to witness a rotation of the guard – with a unit of guards at the coffin replaced with another group.

The ceremonial uniforms and their staffs were reminiscent of a time long past.

It was then time to leave and as I joined the others in walking towards the exit, I noticed that everyone – myself included – looked back for one last look at Her Majesty’s coffin.

One last goodbye to a woman who served the country unconditionally for seven decades.

A husband held his wife close as she quietly sobbed as we all moved out of the hall and spilt out into the street.

As I emerged near New Palace Yard, a lone bagpiper played Amazing Grace, bringing the sombre experience to a close.

It was a day I will never forget.